INTRODUCTION
Resin-based restorative materials are widely used in dentistry. In general, the resin part of these materials consists of a mixture of methacrylate monomers that are polymerized in situ with a in a blue light initiated free-radical polymerization . The polymerization process never reaches completion, and unpolymerized monomer may be released after curing. The resin composition is a parameter influencing polymerization (degree of conversion; DC), material properties and toxic potential.

2-[3-(2H-Benzotriazol-2-yl)-4-hydroxyphenyl]ethyl methacrylate (UV090) is a mono-methacrylate monomer used in several commercial materials such as contact lenses and as an UV-absorbant in in polymer industry. It has also been used in small amounts in resin-based filling materials. In this study we aim to characterize the physical properties and toxic potential of resin-based dental composites containing different amounts of the Triazole-monomer.

The degree of conversion (DC) was determined by FT-IR and ATR-method directly after irradiation and after 3 hrs. Flexural strength was determined according to ISO 40491 with a Lloyds LRX testing machine. Leakage of unreacted monomer was measured in extracts from cured specimens incubated for 24 h in ethanol/water (75/25 vol/vol) at 37 °C using gas- chromatography. 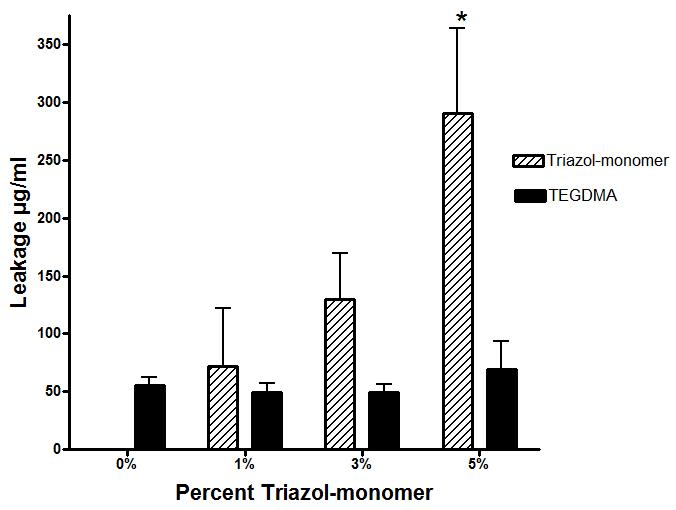 Fig 2. Leakage of unreacted TEGDMA and Triazol-monomer in a mixture of vol.75/25 etanol/water measured after 24h with gas-chromatography

The toxic potential of Triazole-monomer was determined by the MTT test (ISO 10993-52).

RESULTS AND DISCUSSON
Decreased flexural strength was observed as (figure 1). That caused by the formation of a less complete polymer network using the mono-methacrylate.

The MTT test yields a relative number of living cells showed a dose-dependent decrease of viability in the L929 cells. Both cell death and decreased cell growth may be the cause of this finding. HEMA a widely used monomer in dental composites showed the same level of toxcity as the Triazole-monomer( 200μM ) at 50 times higher concentration. Use of flow cytometeri indicated an accumulation in the G1-cell cycle phase Figure 3 Viability measured with MTT. Increasing amount of Triazole-monomer in test-solution reduced the cell viability 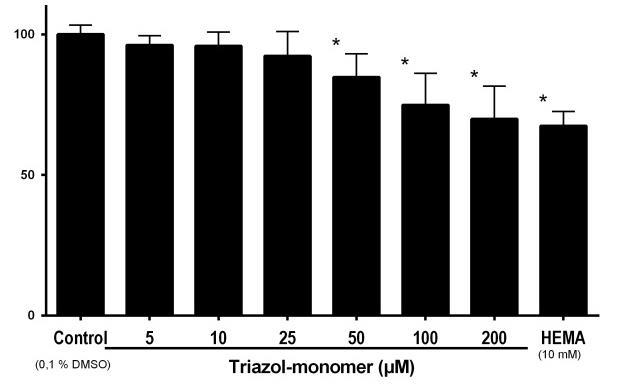 In summary, this study showed that increased amounts of the Triazole-monomer negatively influenced the measured properties of the experimental composites.

ACKNOWLEDGMENTS
The authors would like to thank Anne Wesmann and Hanne Wellendorf for excellent technical assistance.