None of the tested composite materials was deemed less safe to use than the others, a recent report from NIOM concluded. The release of monomers from the different composites was similar. Initial cytotoxicity screening of extracts of the materials indicated some differences between the products. However, further evaluations could not verify a cytotoxic potential. The report concerning the safety of composites, including “bulk fill” and Own Brand Label (OBL)-materials, was prepared for the Norwegian Directorate of Health.

Four composite materials were included in the investigation: 4U (Nordenta, OBL-material), Filtek Bulk Fill Flowable (3M ESPE), Tetric EvoCeram Bulk Fill (Ivoclar Vivadent) and Filtek Z250 (3M ESPE) as reference material. Filtek Z250 is a well-established material in clinical use for years. Composite specimens were cured from one side according to instructions, and polished to remove the inhibition layer. The specimens were immersed for 24 h in water for elution studies and in cell medium for cytotoxic evaluations.

For each material, the two most dominant monomers eluted were quantified and the results are shown in the figure. Smaller amounts of other monomers may also leach from the materials. None of the composites released significantly larger amounts of monomers than the others. 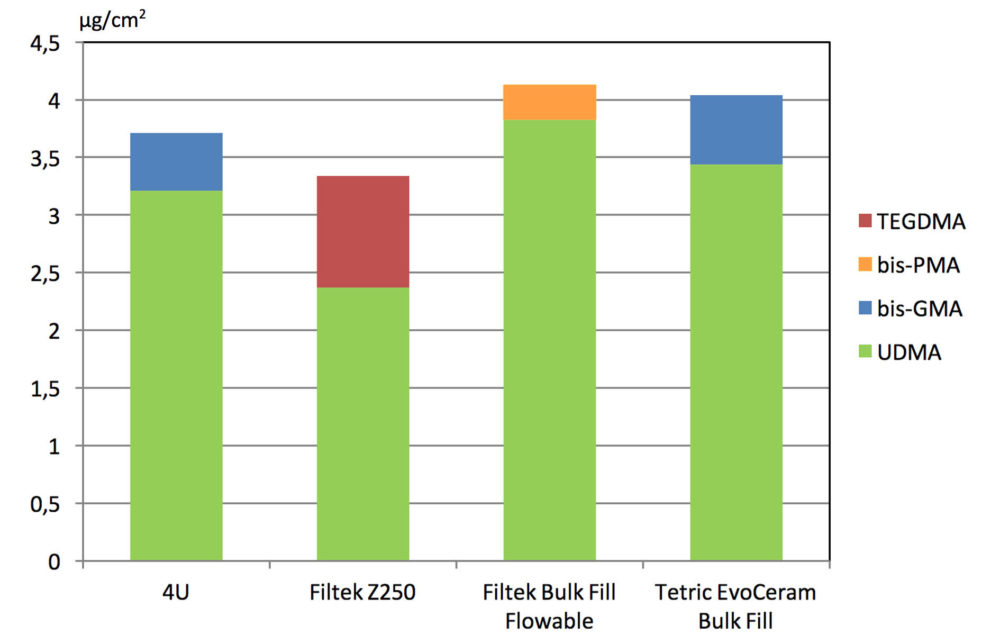 Concentration of eluted monomers from the composites, in microgram per square
centimeter surface area.

The results of the screening tests for cytotoxicity are given in the table. Two cell lines (L929 mouse fibroblasts and BEAS-2B bronchial epithelial cells) were used to obtain a more secure evaluation.

The test results for Filtek Bulk Fill Flowable and Filtek Z250 were below the acceptable limit for non-cytotoxic agents (70 % cell metabolic activity, according to international standard) and were therefore investigated further. Flow cytometry did not indicate any changes in cell growth pattern or increased cell death after exposure to extracts of the materials. Neither were there any indications of increase in oxidative stress, DNA-damage or protein damage.

The full report (in Norwegian) can be found here: www.niom.no/komposittmaterialer