The oral microflora – a reservoir of antibiotic resistance genes?

The use of antibiotics may stimulate horizontal gene transfer and select for resistant bacteria. A recent study reported that a single orally administered antibiotic treatment may cause enrichment of resistance genes and profound ecological shifts in feces. The increase in antibiotic resistant bacteria calls for conscious antibiotic prescription which should be restricted to evidence-based knowledge of their usefulness to the patient.

One of the most significant medical achievements in human medicine was the discovery and introduction of antibiotics to cure infectious diseases. Today, effective antibiotics represent a prerequisite for modern healthcare. Antimicrobial resistance is, however, an increasing global threat. It is estimated that resistant bacteria were responsible for the death of 25,000 people in the European Union, Iceland and Norway in 2007. 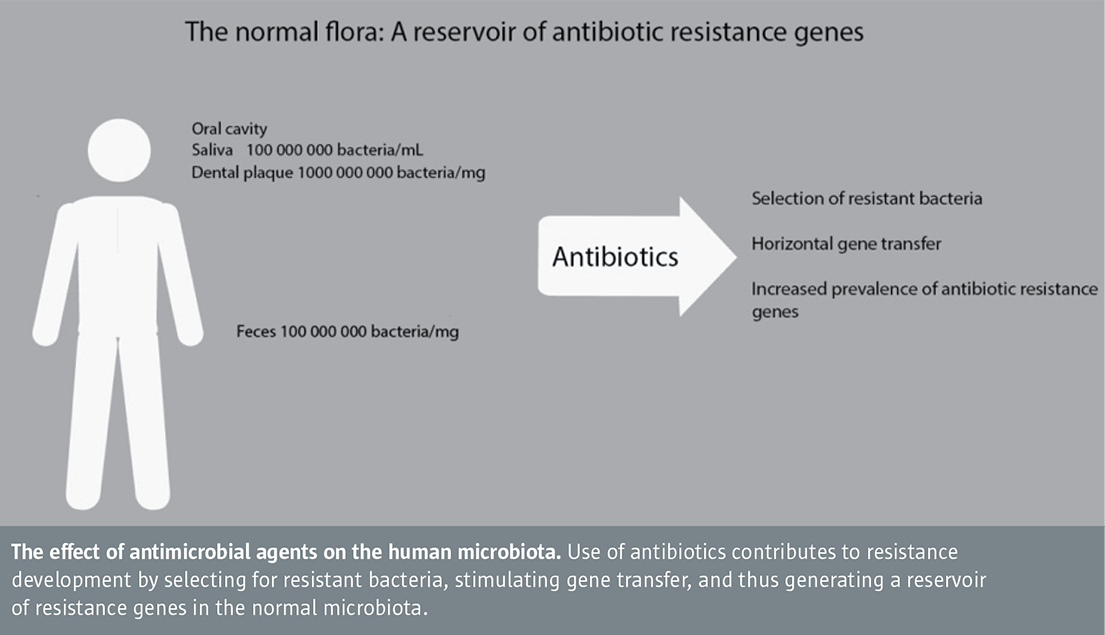 Genes giving rise to antibiotic resistance are found in the natural environment, and such genes existed long before antibiotics came into clinical use. Enzymes that break down penicillin are estimated to be two billion years old. Thus, a reservoir of resistance genes exists in the natural environment. The reason for the development and the role of these genes in the environment is not known with certainty. In addition, resistance genes are found in the human normal flora, including the oral microbiota. The normal flora may therefore constitute a reservoir of resistance genes, with the possibility of transferring genes to pathogenic bacteria.

Bacteria may acquire resistance to antibiotics either by de novo mutations or by acquiring DNA from the environment, known as horizontal gene transfer. Horizontal gene transfer is essentially mediated by three different mechanisms: Transformation, in which the bacteria take up DNA from the environment; transduction, whereby bacteria are infected by a bacteriophage (bacterial virus), or through conjugation, in which bacteria receive a small circular DNA molecule from a donor upon contact.

In the oral cavity bacteria form multispecies bacterial communities on teeth and mucous membranes known as biofilms. In biofilms, bacteria are in close contact with each other, thus facilitating transfer of genetic material between strains of a species or between species.