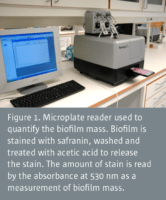 The oral cavity is one of the human habitats with the highest diversity of bacterial species. It is estimated to be over 700 bacterial species that are capable of residing in this habitat. Bacteria were long thought of living as free floating, planktonic cells. However, it has become clear that the preferred form of living is in a biofilm.

Biofilm is a community of bacteria living on a surface, embedded in an extracellular matrix composed of proteins, polysaccharides and DNA. Oral plaque is a typical example of a multispecies biofilm. Development of a dental biofilm is an ordered sequence of events, starting with pioneer species attaching to the pellicle coating the surface. The attached bacteria will grow and modify the environment. 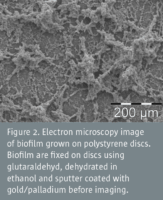 This enables that more fastidious bacteria can colonize and join the biofilm. In the biofilm, different bacterial species are living in close proximity to one another, which enables both intra- and inter-species interactions. The biofilm phenotype of a bacteria is distinct from the same species when grown planktonically. Biofilms have increased tolerance to antimicrobials, and provide a greater protection from the host defense, which makes them difficult to treat.

If changes occur in the environment, the proportion of the different bacteria in the biofilm may change. Such a change may occur with frequent intake of fermentable carbohydrates which selects for the growth of acid tolerant and acidogenic species in the biofilm. Such an ecological shift in the biofilm on a tooth may lead to caries development. 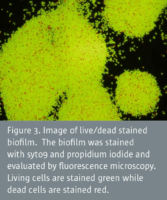 To study oral biofilms in the laboratory, we can use different species separate (monospecies biofilm) or several species together (multispecies biofilm). NIOM has a special interest in studying different antibacterial compounds and their effect on the formation and growth of biofilm. Such compounds can be incorporated in or coated on the surface of the biomaterial investigated.

NIOM has a number of techniques available for studying biofilm properties. The amount of biofilm can be quantified after safranin staining (Figure 1), and can also be visualized by electron microscopy (Figure 2).

The viability of the biofilm can be determined by live/dead staining and fluorescence microscopy (Figure 3) and by viability counting after detaching the biofilm followed by plating on nutrient agar plates.