Important factors to ensure long-lasting fillings, namely light intensity, curing time and the resulting light dose, varied severalfold, shows a recent questionnaire among Norwegian dentists. Eight out of 10 respondents could not state the intensity value of their curing light, leaving an adequate curing time uncertain. Adding to the uncertainty was the fact that a higher number of these respondents did not maintain their curing light device regularly.

Thirty percent of the respondents did not use eye protection against blue light,
and of these, most were older than about 40 years. 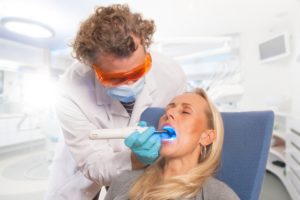 The total light dose applied to a restoration could only be estimated for the 20% of respondents who reported the curing light intensity (irradiance). The highest light dose applied to cure one layer of composite material was 15 times higher than that of the lowest. The highest value was about twice that reported in the literature as being adequate for curing while the lowest estimated value was among the lowest for adequate curing. An unwanted side effect of curing is the possible eye exposure to reflected, blue light. Estimations showed that exceedance of hazard limit values for blue light to eyes was possible after placing eight to 10 fillings provided the mean reported irradiance value was used. Thirty percent of the respondents did not use eye protection against blue light, and of these, most were older than about 40 years.

The dentists placed an average of eight restorations per day spending an average curing time of 27 seconds on each layer. The total curing time per day, all layers included, was 13 minutes, varying between 1 to 100 minutes.

About 15% of the dentists reported that they had no routines for regular maintenance of their curing lights,
but about half of them monitored the light irradiance regularly with a curing light meter.

The questionnaire used in this study was sent to all dentists in the Public Dental Service in Norway in 2015. A response rate of 56% was obtained. Age and gender of respondents varied similarly to dentists working in private practices.

Reported data is scarce on light curing times of restorations and irradiance of the curing devices used. In this study we sought to improve the knowledge of such parameters as total light dose applied to a restoration layer and the total potential exposure to reflected light to the dentist’s eyes during a workday.