In 2011 an electronical questionnaire study was performed by one of the researchers currently working at NIOM. The survey was distributed to all public dental health-employed dentists in Norway to investigate their opinions, knowledge and diagnosis of dental erosive wear. A response rate of 60% was achieved after two reminders. The questionnaire included a patient case where the dentists were asked which clinical advice they would give the patient and which treatment they recommended (Figure 1). 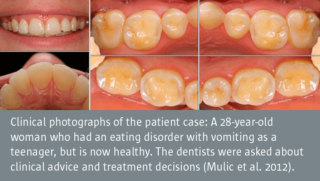 Without revealing it to the respondents, the severity of the erosive lesions were scored on surface level by the authors as follows: Enamel lesions (grade 2) were registered on central incisors and 2nd molars, while dentine lesions (grades 3, 4 and 5) were seen on lateral incisors and 1st molars. The patient case was a typical example of a young adult, with a combination of both mild enamel and severe dentine lesions.

The results of the questionnaire revealed that the responding dentists had few problems registering this difference. The majority of dentists would give the patient information about good dietary and drinking habits, and recommend rinsing with fluoride. More than half the dentists would give information about brushing technique/habits. Restoration with a filling or prosthodontic treatment was most commonly suggested for the upper 1st molars (63.1%). Surprisingly, about 50% of the dentists would not choose operative treatment for some of the other dentine lesions in the patient case. In contrast, about two thirds of the dentists would restore enamel lesions on the central incisors and 2nd molars. Logistic regression analyses revealed that male dentists significantly more often than females suggested non-operative treatment on upper 1st molars.

The survey showed that dentists were relatively up to date regarding clinical recording and diagnosis of dental erosive wear, although some inconsistencies were seen in treatment decisions.