A recent NIOM paper on bond strength between dentine and a novel cement intended for root fillings, shows promising results. In the study, bond-strength significantly increased within the first 28 days.

Mid-root dentine slices of 1 mm thickness were obtained from human maxillary incisors. After enlarging the lumen of the pulp canal to 1.3 mm, the cavities were randomly filled with one of the four test materials; Protooth, ProRoot MTA (calcium silicate cement), Ketac-Molar (glass ionomer cement) or Dycal (calcium hydroxide-based cement). 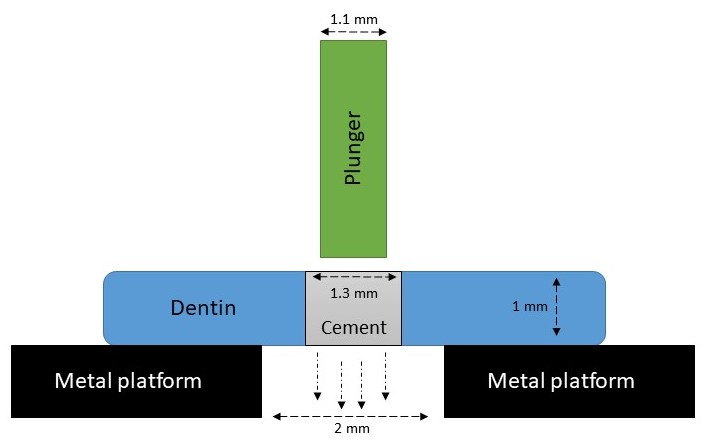 Pictured: Cross-section of the measurement model.

The samples were immersed in physiological buffer solution (PBS). A push-out bond-strength test was performed using a Lloyd universal testing machine after 1 day, 28 days and 180 days. As shown in Figure 1, the test was performed by applying compressive force on the surface of the test material until bond failure occurred (push-out).

Protooth showed the highest push-out bond strength of the four test materials. Furthermore, the bond-strength for Protooth significantly increased within the first 28 days, as opposed to results from the other test materials.

The authors conclude that further testing will reveal if Protooth is a candidate for pulp protection, treatment of endodontic complications, caries sealing and post or crown cementation with promising bonding to dentine. 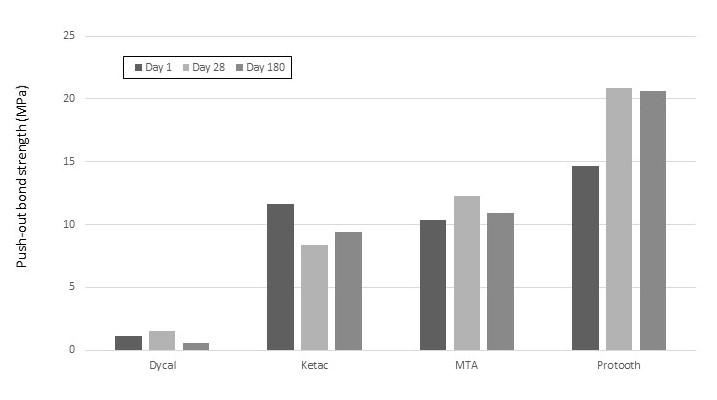 Pictured graph: Push-out bond strength on days 1, 28 and 180 in each test material.