Neonatal jaundice, or hyperbilirubinemia, is a relatively common condition, and occurs in 2 out of 3 newborns. The condition is often transient. However, untreated hyperbilirubinemia can cause kernicterus and nervous system damage. Worldwide, over 114 000 infants die and 65 000 infants grow up with permanent brain damage due to this condition [1]. A large percentage of these infants live in South-East Asia and in Africa south of the Sahara, often in low-income countries.
Conventional treatment of neonatal jaundice using phototherapy units is difficult in low-income countries due to i.e. lack of electricity and equipment. However, many of these countries have abundant sunlight, which contains the relevant wavelengths of radiation for treatment of neonatal jaundice. Phototherapy units emit blue light with peak wavelengths of 450 nm to break down excess amounts of bilirubin by isomerising the bilirubin molecules to become more water-soluble which can be excreted more easily. The disadvantage of sunlight is that ultraviolet light is potentially harmful. UV radiation can cause acute erythema, or sunburn, and blue light together withUV may damage infant eyesight [2].
The aim of this project is to investigate if phototherapeutic exposure to sunlight could be included in the treatment methods of neonatal jaundice in low-income countries. This has been accomplished by using a program called libRadtran to simulate atmospheric conditions and the incoming solar irradiance [3]. The irradiance was weighted by using an absorption spectrum of bilirubin [4] and an action spectrum of erythema [5]. The main results are the ratios of beneficial to harmful irradiance for treatment of the infants during different atmospheric conditions.
The investigated atmospheric parameters were cloud optical depth, thickness of the ozone layer, aerosol horizontal visibility, solar distance and surface albedo. All parameters were simulated separately as a function of a changing solar zenith angle (SZA), which was in turn connected to geographical location and time of year. Ratios of beneficial to harmful irradiance concerning the most important temporal variations of incoming solar irradiance can be seen in figures 1a to 1c.
Figure 1: Ratios of beneficial to harmful incoming solar irradiance, denoted by Ebil=ECIE, for three varying atmospheric parameters as a function of changing SZA. 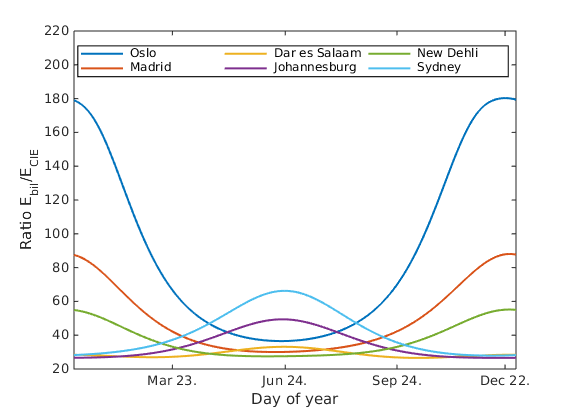 To investigate how solar zenith angle changes with geographical location and time of year, the incoming irradiance in six selected locations were simulated at noon in the local time zone for each day of 2015. The locations were Oslo, Madrid, Dar es Salaam, Johannesburg, New Delhi and Sydney. The resulting ratio of beneficial to harmful weighted irradiation is shown in figure 2. All ratios have the same overall shape, which results from the optical properties of the atmosphere. The ratio of beneficial to harmful irradiation is larger for less transparent atmospheric conditions, however, the irradiation is much stronger for more transparent conditions.

Figure 2: Ratio of  Ebil=ECIE asfunction of
geographical location and time of year.
There is a trade-off between a more beneficial ratio of irradiation and high values of irradiation. If the infants were to be treated in the afternoon, when the ratio is highest, they would have to be exposed for a longer timespan than in the middle of the day. An inclined position towards the sun may however decrease the exposure time. The ratio also suggests that the treatment might be more predictable when the solar zenith angle is below 30°, as the ratio is stable for these angles. However, more research is needed to estimate required exposure times for sufficient treatment of neonatal jaundice by solar exposure, and the accompanying health risks. To avoid adverse skin effects from exposure to UV radiation, it is important that the absorbed dose in the infants at all times stay below the minimal erythema dose.
The project concludes that using sunlight as a method of treatment for neonatal jaundice is possible, especially in locations with abundant and stable access to sunlight. Further research includes a comparison with current treatment standards with respect to exposure time, and a modelling of the exact effect of blue light on the bilirubin molecules in infant skin. The atmospheric conditions will also be developed to simulate actual conditions for selected areas related to low-income countries where this method of treatment is more relevant.
[1] B.O. Olusanya, T.A. Ogunlesi, P. Kumar, N.Y. Boo, I.F. Iskander, M.F.B de lmeida, Y.E. Vaucher, T.M. Slusher, “Management of late-preterm and term infants with hyperbilirubinaemia in resource-constrained settings”,BMC Pediatrics.15(39) (2015).
[2] The International Commision on Non-Ionizing Radiation Protection, “ICNIRP Guidelines on limits of exposure to ultraviolet radiation of wavelengths between 180 nm and 400 nm (incoherent optical radiation)”, Health Physics 87(2), 171–186 (2004).
[3] B. Mayer, A. Kylling, C. Emde, R. Buras, U. Hamann, J. Gasteiger, B, Richter, “libRadtran User’s Guide”, http://www.libradtran.org/doc/libradtran.pdf (2015).
[4] A.A. Lamola, M. Russo, “Fluoresence excitation spectrum of bilirubin in blood: A model for the action spectrum for phototherapy of neonatal jaundice”, photochemistry and Photobiology. 90(2) 294–296 (2014).
[5] Commission Internationale de L’Eclairage, “Erythema Reference Action Spectrum and Standard Erythema Dose, ISO 17166:1999/CIE S 007-1998”, (Vienna: CIE) (1999).