Summary of a Master thesis by Torbjørn Knarvang

The triazole-monomer 2-[3-(2H-Benzotriazol-2-yl)-4-hydroxyphenyl]ethyl methacrylate (UV090) is a mono-methacrylate monomer used in several commercial materials such as contact lenses and as an UV-absorbent in polymer industry. It has also been used in small amounts in resin-based dental materials. We characterized the physical properties and toxic potential of resin-based dental composites containing different amounts of UV090. 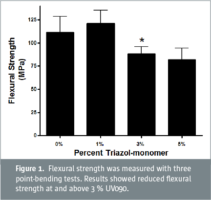 Experimental dental composites containing inorganic filler, bisphenol A glycidyl methacrylate (BisGMA), triethylene glycol dimethacrylate (TEGDMA), UV090 and initiator components were prepared. The composites (2 mm thick discs) were cured for 20 seconds using a dental curing lamp before the tests. Degree of conversion and flexural strength was determined. Leakage of unreacted monomer was measured in extracts from cured specimens incubated for 24 h in ethanol/water at 37 °C using gas chromatography. The toxic potential of the UV090 was determined by the MTT test.

There was no measurable effect of UV090 on degree of conversion at the concentrations tested. However, decreased flexural strength was observed when more than 3% of the triazole-monomer was added (Figure 1). 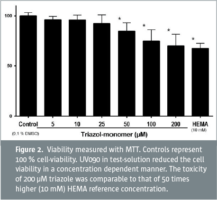 A possible explanation is that less complete polymer network is formed when substituting the dimethacrylate TEGDMA with the monomethacrylate UV090. Leakage of UV090 from cured composite increased with increasing content, while there was no change in TEGDMA release.

The MTT test yields a relative number of living cells and showed a dose-dependent decrease of viability in the L929 cells exposed to UV090 (Figure 2). Hence, both increased cell death and decreased cell growth may be the cause of the finding. Use of flow cytometry showed an accumulation in the G1 phase of the cell cycle after UV090 exposure, suggesting growth inhibition as a cause of decreased MTT values. HEMA, a widely used monomer in dental adhesives, showed the same level of toxicity as the UV090 (200 μM) at 50 times higher concentration.

In summary, this study showed that increased amounts of UV090 negatively influenced the measured properties of the experimental composite.