NIOMs microbiological laboratory is approved as a class 2 laboratory from the Norwegian Health Ministry and is approved for work with contained GMM (genetically modified microorganisms). The laboratory is equipped with facilities for antibacterial testing and growth of biofilm on materials surfaces.

Biofilm is grown on biomaterial in microtiter wells or in a biofilm reactor. Antibacterial compounds can be incorporated in or coated on the surface of the biomaterial. Different techniques are used to study their effect on the formation and growth of biofilm. The amount of biofilm can be quantified after safranin staining, and also be visualized by electron microscopy. The viability of the biofilm can be determined by live/dead staining and fluorescence/confocal microscopy, resazurin assay, XTT assay or by viability counting after detaching the biofilm followed by plating on nutrient agar plates.

The Colony Forming Unit (CFU) method can be used for identification of microorganisms and for testing the effect of antimicrobial substances and techniques. It is a sensitive and widely accepted method within microbiology. In this method, the number of living cells (cells able to reproduce) present in a suspension is counted on a nutrient agar surface.

Bacteria cells are collected and dispersed in a nontoxic solution such as phosphate buffered saline or physiologic water. The cell suspension is then diluted, normally in a series with a 10-fold dilution, in order to obtain plates with a countable number of bacteria. A certain amount from each dilution is plated, in replicates of 3 or 4, on petri dishes with nutrient agar intended for the bacteria in question. The petri dishes are incubated in suitable environments and for an appropriate time before colonies are counted. Each colony that can be counted is called a colony forming unit (CFU), and the number of CFUs is related to the viable number of bacteria in the sample. The number of bacteria in the original sample is calculated mathematically, factoring in the amount plated and its dilution factor. The results are often presented as CFU/ml (colony forming units per millilitre) for liquids, and CFU/g (colony forming units per gram) for solids. 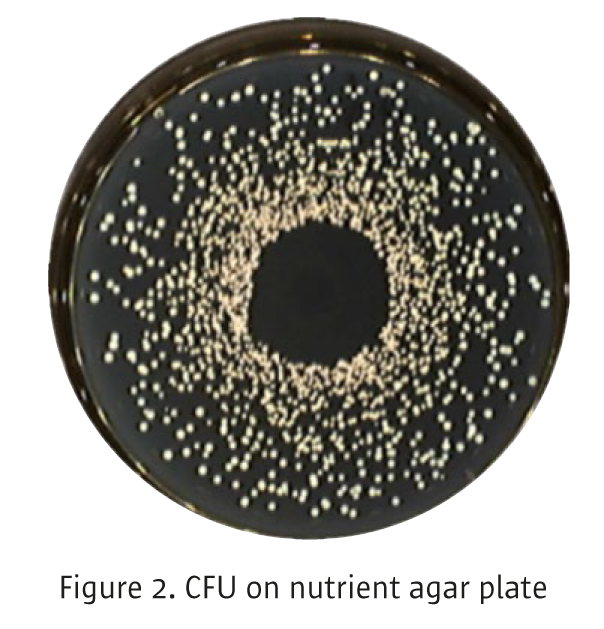 The traditional method with diluting and plating is time-consuming, and therefore the number of variables in a test can be limited. NIOM’s microbiology laboratory is therefore using a spiral plating technique where an instrument, the WASP spiral plater (Figure 1), deposits a given volume of sample on to a rotating agar plate.