Is blue light damaging to our skin?

Part of the challenge in this study was to get accurate measurements of light and to estimate the amount it would take to cause change and damage.

Blue light beams at us during procedures at the clinic, from the screens we watch between patients, and from our ever present mobile phones. Recently we have seen cosmetic companies selling creams marketed towards blue-light damage. But can blue light really damage the skin, and if so- how?

To find out, NIOM’s Dr. Ellen Bruzell, herself an expert in photobiology, teamed up with a small group of researchers from the Norwegian Radiation and Nuclear Safety Authority (DSA) and The University of South-Eastern Norway.

– We set out to investigate whether there were components in the skin that reacted negatively to blue light. We know we have to protect ourselves against ultraviolet (UV) rays, but we wanted precise data on natural lighting and blue light from screens, and general lighting indoors, Bruzell says.

Finding light and skin data
– By using several different optical instruments at both DSA and NIOM, we were able to measure how much blue light actually is emitted from the different types of general lighting and screens that surround us, Bruzell says.

The team also looked at earlier research on blue light exposure on human skin to find out how much light it takes to make skin changes. They compared this amount to the amount of light emitted from general lighting and screens. They also compared the amounts of outdoors blue light and UV throughout the year and in different parts of the world.

Cell phone screen light
– For example, we calculated that it would take a cell phone’s light exposure around the clock for three months to potentially cause negative effects on your facial skin.

The group found that a person would be severely sunburned by UV radiation before ever reaching damaging levels of blue light.

– Our data mean that dentists and others, who spend a lot of time surrounded by screens and artificial light, can relax as far as skin damage is concerned. Keep using UV protection outside and when exposed to UV radiation, but in front of the screen – your skin is safe, Bruzell says.

It should be noted, however, that excessive doses of blue light are known to cause damage to eyes. 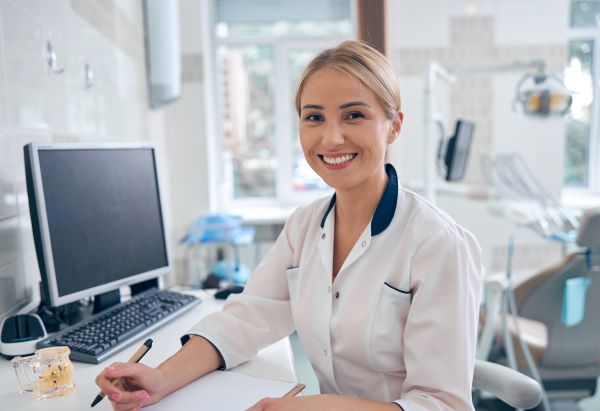 Illustration photo by istockphoto: We are surrounded by screens at work and at home, but a special blue light-cream for our skin is not neccessary according to Bruzell and colleagues.

References: The study is by Terje Christensen from USN and DSA, Bjørn J. Johnsen from DSA, and Ellen M. Bruzell from NIOM. The results are published in:  Photochemical and Photobiological Sciences, and can be read in it’s entirety here: https://link.springer.com/article/10.1007%2Fs43630-021-00043-9