In memorandum: Ivar A. Mjör 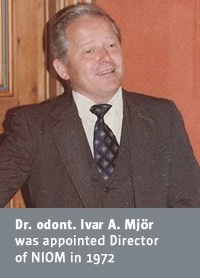 It is with great sadness that NIOM learns of the passing of professor Ivar A. Mjör. In 1972,  Dr. Mjör became the inaugural director of the Nordic Institute of Dental Materials (NIOM) in Oslo. He developed NIOM to become recognized internationally as a truly leading-edge research laboratory in the world on dental biomaterials during his 20 years of service at NIOM. During the period of 1968–1973, he was professor in anatomy at the University of Oslo, Norway. In 1993, he became professor of operative dentistry at the College of Dentistry, University of Florida in Gainesville, USA. Dr. Mjör received numerous international awards for his contributions to dental sciences, including several honorary doctorate degrees. Dr. Mjör was the 63rd IADR president and president of the Norwegian Dental Association.