print
All but one patient reported side effects of over-the-counter (OTC) bleaching products, while their teeth became noticeably whiter. Two OTC bleaching products with concentrations of 16% and 22% carbamide peroxide gave the same painful but satisfactory bleaching result. The patients found that the easier the products were to handle, the more satisfied they were with the bleaching treatment. 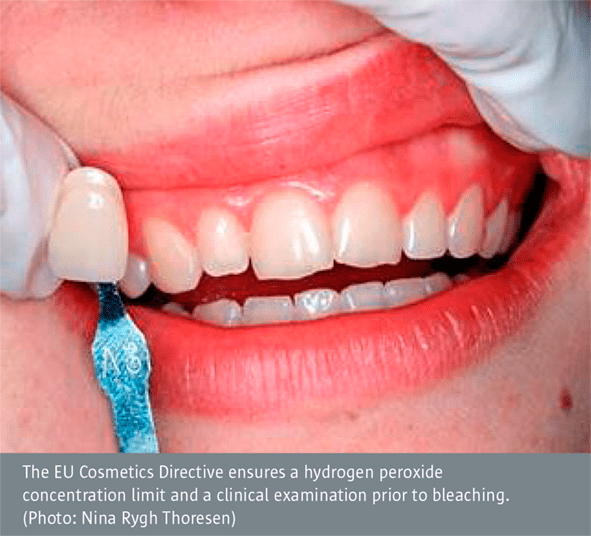 The study was done with the aim to detect any differences in bleaching efficacy and potential side effects of over-the-counter products in use at that time having concentrations below or above 6% hydrogen peroxide (corresponding to about 17% carbamide peroxide). The 6% hydrogen peroxide limit was set by the European Union the same year as the study was conducted, and the EU Cosmetics Directive (76/768/EEC) was adopted by the scandinavian countries a year later. Prior to the enforcement of this directive, consumers did not need a clinical examination before starting a bleaching treatment on their own.

The concentrations chosen were probably too similar to detect any difference. They bleached equally well, and were comparable to using a lower concentration, 10% carbamide peroxide, for a minimum of 15 hours as described in the literature. In comparison, the OTC treatment time was 10.5 hours and was the minimum recommended (by the manufacturers) time for the products. Although the well-known side effects tooth sensitivity and gingival irritation prevailed, several less frequently reported side effects occurred as well. These were e.g. tooth ache and sore throat.

The article also discusses differences in effects between tobacco and non-tobacco users, the use of spectrophotometry versus shade guides, and bias induced when using a visual analogue scale (VAS) for e.g. grading the intensity of an experience.