Overseas and Norwegian-made dental crowns – does the delivery meet the ordered specifications?

print
A total of 24 dental crowns made overseas and 18 crowns made in Norway have been investigated for fulfilment of the requirements according to the Medical Devices Directive (93/42/EEC). The compliance between ordered and delivered alloy composition content of toxic elements (Ni, Cd and Be) and stated declaration of conformity with the Medical Devices Directive were investigated. The investigation revealed major deficiencies for both imported and Norwegian-made crowns. The deviation in the composition was especially pronounced for the imported crowns.

The following issues were examined: 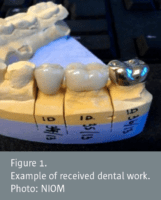 Method
Dentists throughout Norway were contacted with a request to take part in this project. Through their dental technician, preferably single crowns (full crowns in metal or PFM) were ordered in their normal manner.

Analysis of the elemental composition was performed by an external institute. Subdividing alloys was determined by content of noble metals, where high-noble was determined to more than 75% by weight of noble metals and low-noble between 25 wt% and 75 wt% noble metal content. A non-noble alloy is in this project based on cobalt and chrome. Noble metals are gold (Au), palladium (Pd), platinum (Pt), iridium (Ir) and ruthenium (Ru), but not silver (Ag) (2). 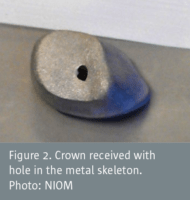 Declaration of conformity lacked for nine Norwegian and ten imported crowns.
Toxic elements were not found in neither Norwegian nor in imported crowns. None of the 42 crowns contained cadmium (Cd) and/or beryllium (Be). Eleven of the non-noble alloys contained Ni, but below the limit of 0.1 wt% set by ISO 22674:2006 (1). Of these 11 crowns, 3 were produced in Norway and 8 imported. It was recorded holes in metal skeleton in 6 crowns, 4 Norwegian and 2 imported (Figure 2).

Discussion
The result of these analyses shows that there may be a risk that the patient receives a crown with a composition that he should not have. All alloys have their advantages and disadvantages, primarily based on the specific composition. A study has shown that patients with Ni allergy have increased risk of Pd allergy (3). The element composition has influence on the mechanical properties, binding ability to porcelain, casting properties and colour of the alloy (4, 5). The alloys which have been found to have deviant composition in this work can thus have different properties than expected.

The reasons why nine alloys had different composition than stated is complex. Too much old metal when casting, misunderstanding of orders, spelling errors, mixing of alloys or deliberately cheating, all these factors are probably involved. A clear communication between the dentist and the dental technician seems to be the key to avoid many of these unfortunate matters. Dental technicians should always issue a declaration that the products meet the directive’s requirements (6). Declaration of Conformity shall follow the patient’s chart and not be stated on slips, invoices or work notes, as found in this study.

The weight ratio between the metal and porcelain was evaluated and showed a thinner skeleton and larger amount of porcelain in the imported crowns when compared to the crowns made by technicians in Norway. However, too few crowns were evaluated to conclude this item.

Conclusions
Element composition showed deviated and/or missing results for 28% of the Norwegian works and 71% of the imported works. Declaration of conformity lacked for 50% of the works delivered from Norwegian laboratories and for 42% of the works delivered from import laboratories. No works contained elements that are not permitted in these alloys.