Haugli is a visiting scientist at NIOM during 2020.

Cobalt-chromium (Co-Cr) alloys are becoming more and more popular with the rise of milling technology. This makes it more important than ever to make sure that dental restorations based on these materials are safe for patients, especially when it comes to any leakage of elements.

– In April, we published a study looking at the cytotoxicity of the metal ions, released from selected dental alloys that had been subjected to dynamic loading. We were especially interested in Co-Cr alloys, Ketil Haugli explains.

Haugli, a lecturer at the Dental Technology Program at Oslo Metropolitan University, OsloMet, teamed up with NIOM’s metallurgist Morten Syverud, and toxicology expert Jan Tore Samuelsen to perform the study.

The team used two different corrosion tests. One, the standard static test (ISO 22674: 2016) and an experimental dynamic test. The latter test was performed to investigate whether repeated loading (to simulate chewing forces) increases metal ion release compared to the static test. Both tests involved immersion of the specimens in a lactic acidic solution (pH = 2.3). Inductively coupled plasma mass spectrometry was used to identify and quantify the elements released.

– The cell-line used for cytotoxicity testing was a human monocyte cell-line (THP-1) a type of white blood cell that plays a major role in the immune system, Haugli says, and adds:

In accord with the thresholds defined in ISO 22674, only low concentrations of released elements were found in the corrosion tests. The dynamic test regime did not increase the metal ion release compared with the static test.

– Of the released elements, only the blend consisting of Zink (II) and Cobalt (II) showed a cytotoxic effect on THP-1 cells at 250 µM and higher concentrations, Haugli says.

Increased cytotoxicity was not observed when other released elements were added to the exposure mixture.

– The good news here is that the alloys tested showed low metal ion release in a hostile environment closer to oral conditions. To broaden our knowledge on combined metal ion exposure scenarios, this study supports that the cytotoxic effects from such events did not differ compared to the cytotoxic effect of the individual metal ions. However, biocompatibility data on long-term effects from low-dose exposure to metal ions are still lacking, Haugli says. 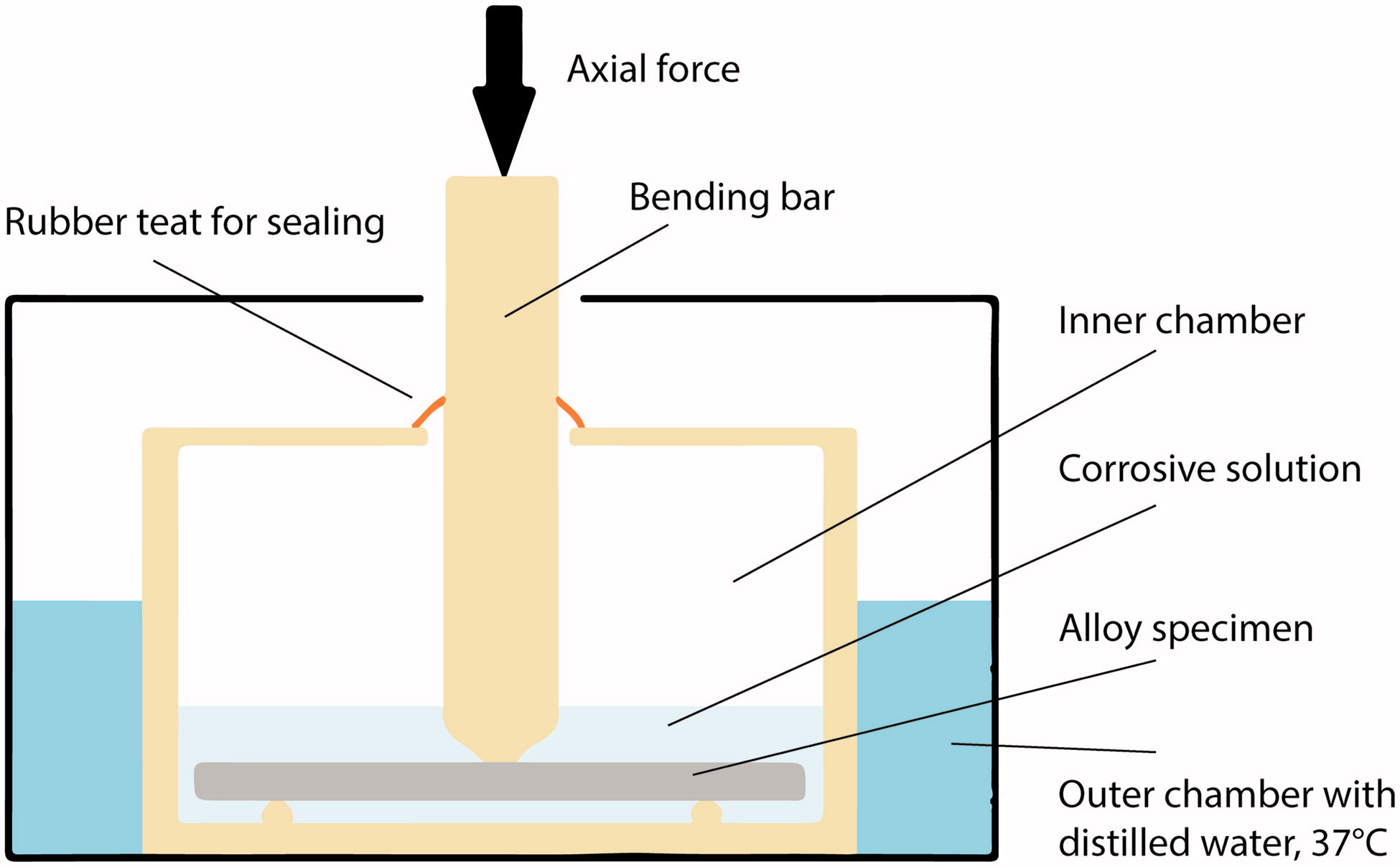 Pictured: Figure 1. The dynamic corrosion test set-up. A specimen was placed on supporting pins immersed in artificial saliva (corrosive solution, pH= 2.3). The inner chamber, the bending bar and the supporting pins comprise of polyoxymethylene (POM) thermoplastic material. The inner chamber was sealed to prevent evaporation of the corrosive solution. The outer chamber was filled with distilled water set to constant temperature of 37 °C.