As the rise in antibiotic resistant bacteria worldwide accelerates, there is a great need for alternative antibiotic treatments like antimicrobial photodynamic therapy (aPDT). Upon blue light irradiation of the dye curcumin applied on an infection, toxic compounds like oxygen radicals are formed. These toxic compounds attack the bacteria at several different points and kill the bacteria with high efficacy. 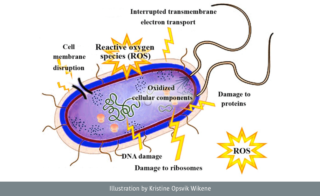 Curcumin was prepared in freeze-dried formulations consisting of a cyclodextrin and two polymers. The cyclodextrin “wraps” the dye and makes it more available to the bacteria. One of the polymers used was hyaluronic acid which may enhance wound healing.

The resulting orange dry foams dissolved rapidly in water. They could therefore be applied both directly on a moist infection (e.g. in the oral cavity) or be dissolved before application by dripping or spraying.